How a Plan to Save the Power System Disappeared 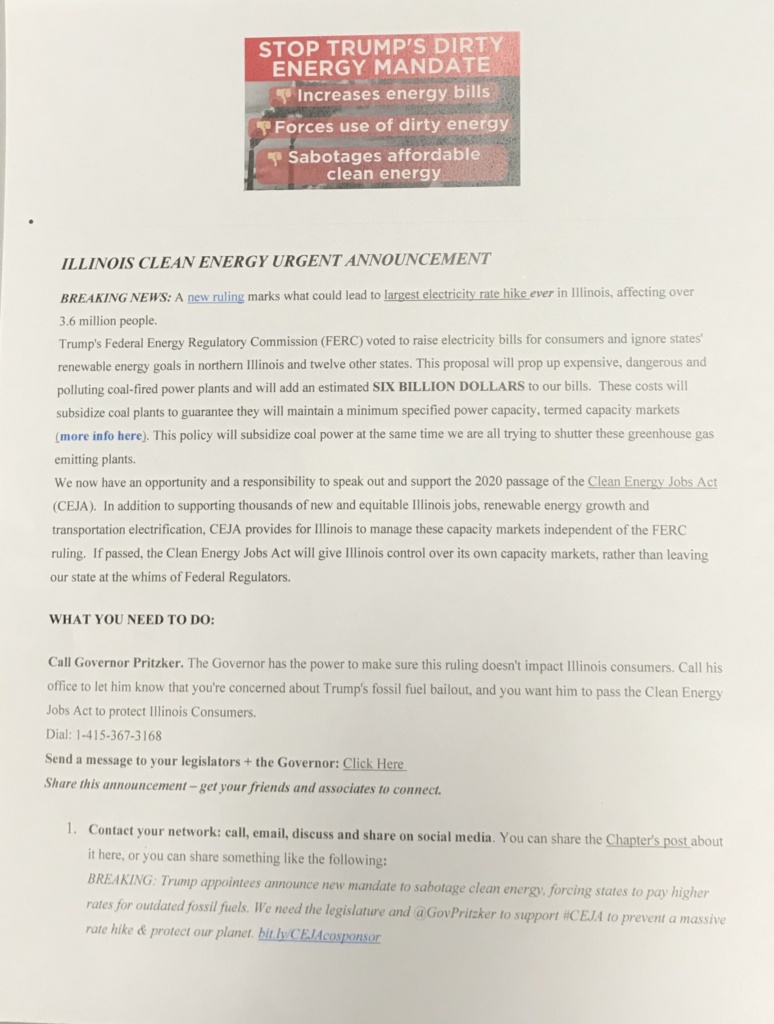 I am writing to follow up with information on electric buses as we discussed earlier today. As I mentioned, Pace is currently in the planning stages for their new north garage. My understanding is that they are interested in installing Compressed Natural Gas (CNG) infrastructure in that garage as they did several years ago in the south garage. Since the time they made the decision for the south garage, electric bus technology has made huge strides and many other transit agencies have committed to electric buses.

Given the urgency of climate change, it is irresponsible of Pace to put in place infrastructure that will lock us in to fossil fuels for 15+ years. Instead, I hope that Pace will reconsider electric buses for the new garage.

There are grants available to help offset the costs of electric buses. There is currently $44 million in grant funding available through the EPA’s Diesel Emissions Reductions Act National Grants Program (https://www.epa.gov/cleandiesel/clean-diesel-national-grants). Pace had previously applied to FTA’s low or no emission program (https://www.transit.dot.gov/funding/applying/notices-funding/low-or-no-emission-low-no-

Pace had previously applied to FTA’s low or no emission program (https://www.transit.dot.gov/funding/applying/notices-funding/low-or-no-emission-low-no-program-fy-2019-notice-funding), but was denied a grant.

Lake County, which is part of the Chicago Metropolitan Ozone non-attainment area, is in one of Illinois’ priority areas for VW mitigation trust funding. IL EPA, which is the designated agency for planning and allocating IL’s VW funds, has not said when or how the next round of that funding will be announced. The state has $109 million in this fund, approximately $88 million of which remains to be spent. When more information is available, IEPA will send announcements of VW funding through its listserve here: https://www2.illinois.gov/epa/topics/air-quality/driving-a-cleaner-illinois/vw-settlement/Pages/default.aspx.

As I mentioned above, we must take action quickly to avoid the worst impacts of climate change and cannot afford to lock ourselves in to another 15+ years of fossil fuel infrastructure. The Climate Reality Project, Chicago Chapter, would be happy to provide information or make a presentation on climate change to the Pace board. I’m happy to connect them with any board members who might be interested in such a presentation. In addition, there is an article at: https://phys.org/news/2019-12-toll-degree-hotter-trillions-tons.html about the urgency of action to reduce carbon emissions.

The CTA has had 2 electric buses in their fleet since 2014, and contracted with Proterra for another 20 electric buses last June (https://www.greencarcongress.com/2018/06/20180614-cta.html). Proterra said that they would extend the same pricing to Pace that CTA obtained through their RFP. If Pace is able to accept that price, it would save the time and cost of going through an RFP process.

All the collar counties in the Chicago region have earned an F for air quality from the American Lung Association (Illinois). This makes it especially important that we transition our fleets, including public transit, to cleaner electric vehicles.

Electric vehicles make financial sense (The Very Good Math of Electric Buses). The lower maintenance and fuel costs of electric buses, combined with the grants available to offset their purchase, make the lifetime costs lower than those of fuel burning vehicles. Payback time for electric buses ranges from 5-12 years, depending on the type and cost of the charging infrastructure, and transit agencies keep their buses for at least 12 years.

Thanks for anything you can do to help get this information to your Pace representative. Please let me know what additional information would be useful to help Pace consider electrification of the north garage. 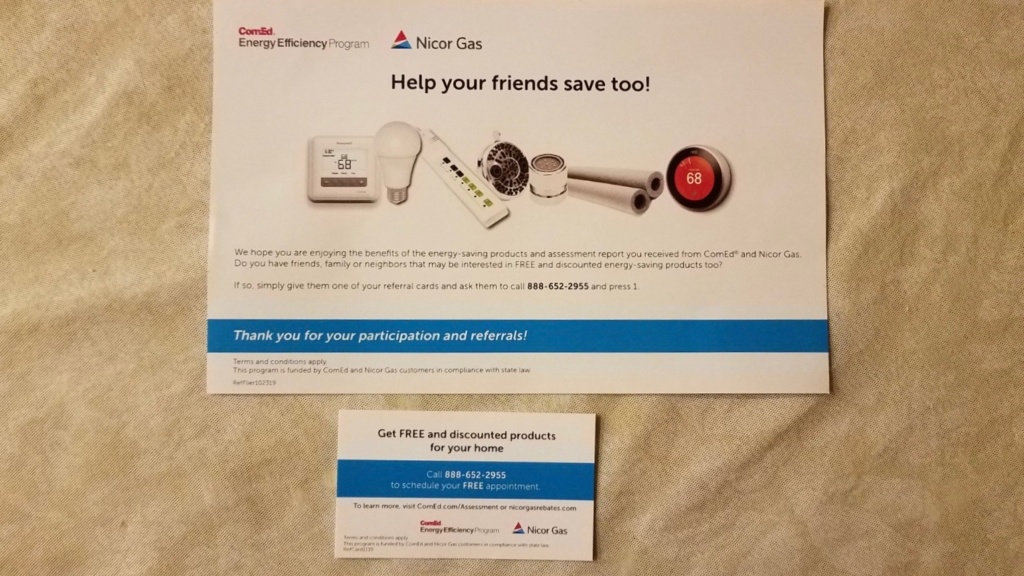 DiMaioTalk – Changes in the Climate System

An Ocean Engineer and a Nuclear Physicist Walk Into Congress …

America’s About to Miss a Big Obama-Era..

To celebrate the installation of solar panels on the roof of Countryside Church in Palatine, parishioners initially envisioned “a party with cake.”

“We decided we wanted to share with the community and other congregations what we had learned,” said Mark Krivchenia, one of the parishioners who helped spearhead the campaign to outfit the church with solar panels. “In the end, it comes down to our belief that it’s an ethical and moral issue to care for our common home.”

The solar panels on the roof will cut the church’s reliance on traditional energy sources by 40 percent. They have a guaranteed life span of 30 years and are expected to pay for themselves after eight to 10 years, Krivchenia said.

About a dozen exhibitors were invited to participate in the expo and share information on topics such as native plantings, recycling, renewable energy, electric cars and other conservation issues.

Linda Sullivan, a member of the Illinois chapter of the Sierra Club’s executive committee, said interest in her group has grown significantly since President Donald Trump’s election in November 2016, followed by his controversial appointments of Scott Pruitt to lead the Environmental Protection Agency and Ryan Zinke to serve as secretary of the interior.

“People have realized that they have to get involved and just being in favor of something and wanting something to get done is not enough,” she said. “Trump has started a movement, even though it wasn’t his intention.”

For his part, Skilling lauded efforts by scientists and environmental groups that have been promoting ways to fight global warming by focusing on ways to reduce mankind’s carbon footprint, the way the church has done.

Skilling talked about the broader economic and cultural ramifications of global warming, pointing out the loss of tourism jobs caused by the destruction or depletion of natural resources as well as human migration and military conflict caused by droughts brought on by climate change.

President Donald Trump last year pulled the United States out of the pact, which every other country has committed to ratifying.

In an interview with CBS to mark Earth Day, Bloomberg said he was obligated to honor America’s financial commitment.

“America made a commitment and as an American if the government’s not going to do it we all have responsibility. I’m able to do it,” he said. “So, yes, I’m going to send them a check for the monies that America had promised to the organization as though they got it from the federal government.”

Bloomberg, a billionaire philanthropist, said he hopes by next year Trump will change his mind despite his criticism of the agreement. But if the United States does not rejoin the pact, Bloomberg will continue to foot the annual bill, according to a statement by Bloomberg Philanthropies, the charity he founded.

“Our foundation will uphold our promise to cover any cuts to UN climate funding by the federal government,” Bloomberg said in the statement.

UN Climate Changed ​welcomed the donation, saying, “Financial support of this kind is critical to mobilizing climate action leading up to 2020 and fostering synergies across sectors and geographies in the context of sustainable development.”

Bloomberg last year joined members of the US Conference of Mayors in opposing Trump’s withdrawal of the US from the Paris Climate Agreement and committing to meet environmental goals despite the move.

Bloomberg also announced that Bloomberg Philanthropies, would help coordinate a U.S. effort called “America’s Pledge” and submit a societal NDC – nationally determined contribution – in place of a government one.

Last year, Bloomberg pledged to provide the $15 million that he says the U.N. Climate Change Secretariat will lose from Mr. Trump’s withdrawal from the pact.

A major climate boundary in the central U.S. has shifted 140 miles due to global warming – USA Today

How to Reduce Your Carbon Footprint – The New York Times

Solar panels can live in your window blinds – Mashable

Love solar power but got no rooftop? “Shared solar” is coming for you – VOX

The U.S. Is Tackling Global Warming, Even if Trump Isn’t – NYT Opinion 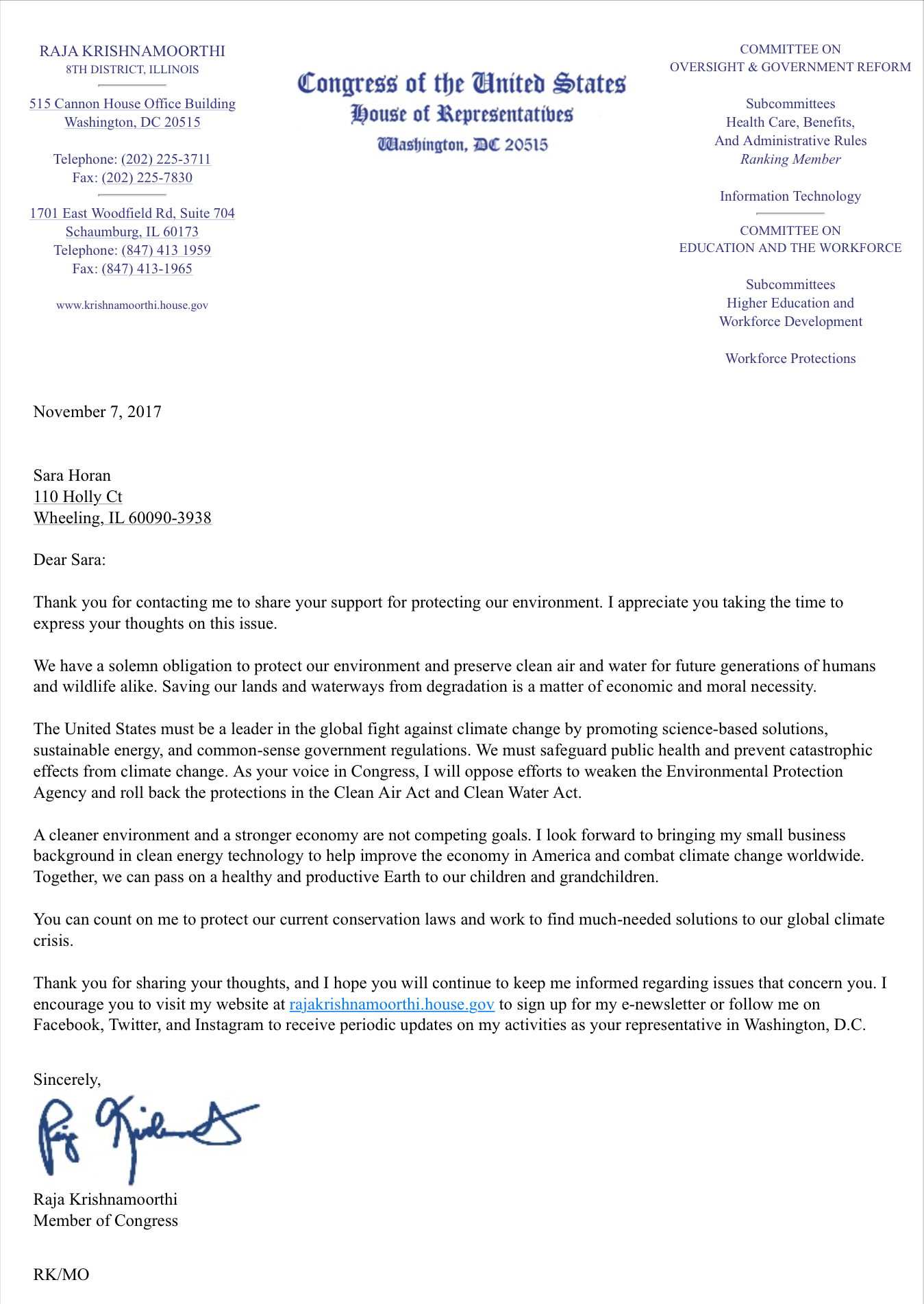 Lisa Murkowski Introduces Bill To Open Arctic Wildlife Refuge To Oil Drilling “This is not a choice between energy and the environment,” the senator said. “We are past that.” – Huff Post

Climate Change Is Complex. We’ve Got Answers to Your Questions – NY Times

War on Science: Here Are Some of the Banned Words at Trump’s Ag Department

Vail Resorts promises to eliminate emissions, waste and offset forest impact by 2030 Resort operator would like all of its electricity to come from renewable sources

This week, former Vice President Al Gore returns to the big screen with An Inconvenient Sequel: Truth to Power, sounding the alarm on the climate crisis transforming our planet and sharing the truth about clean energy solutions. We’re happy to be partnering with our friends at Paramount Pictures and Participant Media to help spread the word about this exciting new film.
An Inconvenient Sequel: Truth to Power highlights our Climate Reality Leaders in action, showing what can happen when people around the world come together for one cause and join the movement for solutions.
Our over 12,000 Climate Reality Leaders are making a difference now more than ever. On June 1, President Trump announced the United States would begin the process of withdrawing from the historic Paris Agreement, which brought 195 countries and parties together to cut greenhouse gas emissions and solve the climate crisis devastating our planet.
That’s why we need you to take action too. If you’re ready to get involved, download our I Am Still In action kit. We’re excited to share that Participant Media is featuring our toolkit as an action everyone can take to help end the climate crisis and uncover the potential for solutions and change.
In the toolkit, you’ll learn:
The facts about the Paris Agreement.
Who’s still supporting the US’ commitments to climate action.
How you can help build support for clean energy and other climate solutions.
Download the toolkit now and make sure to see An Inconvenient Sequel: Truth to Power when it hits theaters nationwide next week. You also have the chance to buy one movie ticket and get a second one free! Click here and use the code CLIMATEBOGO at checkout. This is a limited-time offer, while supplies last. See promotion terms here: atm.tk/aisbogoterms.
GET YOUR TICKETS
Now more than ever, our future is in our hands – and we need you to help us seize the moment. Thank you for taking climate action!
– Your friends at Climate Reality

AN INCONVENIENT SEQUEL: TRUTH TO POWER
BUY ONE TICKET, GET ONE FREE
LEARN MORE