Have We No Decency? A Response to President Trump

Obama-Linked Group to Mobilize Democrats in Battle for House 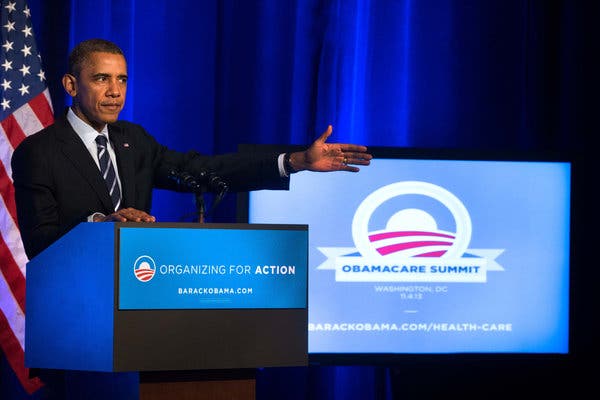 The political committee formed by former President Barack Obama is preparing to mobilize for the 2018 midterm campaign, targeting more than two dozen congressional races and several key state elections with a program aimed at turning out Democratic-leaning voters.

The group, Organizing for Action, which emerged from the vestiges of Mr. Obama’s old campaign operation, intends to deploy organizers in 27 Republican-held congressional districts that could be key to a Democratic takeover of the House of Representatives. Their mission, officials with the group said, will be to coordinate and train volunteers and deploy them to help Democrats in states from California to North Carolina.

In addition, the organization will focus on several elections that may affect the redrawing of the congressional map after the 2020 census; these include races for governor in states such as Florida and Wisconsin and redistricting-themed ballot referendums in Colorado and Michigan. Organizing for Action previously announced it would partner in 2018 with a committee led by Eric H. Holder Jr., Mr. Obama’s former attorney general, to attack legislative gerrymandering in the midterms.

The new effort offers fresh insight into Mr. Obama’s political agenda for 2018: The Organizing for Action campaign emerged in part from a February meeting between the former president and strategists including Katie Hogan, the group’s executive director. In the meeting, Mr. Obama conveyed in no uncertain terms that recapturing the House and helping Democrats gain more influence in the redistricting process were two of his top goals, people familiar with the conversation said.

Jesse Lehrich, a spokesman for Organizing for Action, said in a statement that the group intended to display its grass-roots muscle in the midterm campaign.

“This is an all-hands-on-deck moment for the progressive movement,” he said. “We’re fired up that O.F.A. can play its part by doing what we do best — community organizing.’’

The focus is to be wholly on the general election, Mr. Lehrich said: Organizing for Action will not meddle in Democratic primaries.

Mr. Obama does not have a formal role with Organizing for Action, but the group is directed in large part by his former advisers and is seen by Democrats as reflecting his political priorities. The former president returned briefly to the campaign trail last year, boosting Democratic candidates for governor in Virginia and New Jersey, and he is expected to appear at fund-raisers for the Democratic National Committee and the Democratic Congressional Campaign Committee this month.

While Organizing for Action may play a role in bolstering Democratic turnout machinery in 2018, the elections are also an important test of the group’s staying power. It frustrated traditional party committees during Mr. Obama’s presidency, when some Democratic leaders saw the group as drawing money and attention away from the D.N.C. That committee fell into disarray when Mr. Obama was president, and prominent Democrats, including Hillary Clinton, have criticized the state of the party’s infrastructure in 2016.

Since Mr. Obama left office, Organizing for Action has been active mainly in debates over policy, rather than electoral politics. It has weighed in publicly on several issues at the federal level, including gun control and the Trump administration’s drive to unravel Mr. Obama’s policies on climate, health care and immigration. The group reported raising about $600,000 in the first three months of the year.

Organizing for Action’s list of targeted congressional races covers many of the more moderate and right-of-center suburban areas that have emerged as perhaps the most important battlefield of the midterms. It includes two congressional seats outside Minneapolis, three near Philadelphia and three in the suburbs of Dallas and Houston. The group is pursuing eight congressional districts in California, including seats held by the Republican Representatives Dana Rohrabacher and Mimi Walters, who are running for re-election, and Darrell Issa and Ed Royce, who are retiring.

The focus on suburban areas may underscore both the high political stakes in those districts, and also the limitations of Mr. Obama’s political brand. It is not clear whether Democrats in the conservative states where control of the Senate is to be decided, like West Virginia and Tennessee, would welcome even a secondhand association with Mr. Obama in the heat of a difficult campaign.

Matt Gorman, spokesman for the National Republican Congressional Committee, predicted that activity by an Obama-linked group would stir backlash on the right, and he jabbed at the Democrats’ history of internal conflict.

“No one motivates Republican voters like Barack Obama,” Mr. Gorman said. “We thank his political organization for their in-kind contribution to keeping G.O.P. control of the House. Maybe they should’ve taken the advice of many in their own party and closed up shop after 2016.”